Works by Maria Lassnig available in our gallery

Maria Lassnig, 1941 admission to the master class Wilhelm Dachauer at the Academy of Fine Arts in Vienna.

In 1943, the professor described her painting as “degenerate” and she had to leave the class. Then recorded by Professor Ferdinan Andri. The practice in nude drawing with Professor Herbert Boeckl gives her important artistic and art-critical impulses.

From 1945 she worked in her studio in Klagenfurt, which is also considered a meeting place for poets and painters such as Guttenbrunner, Clementschitsch, Rainer, Hölzer, etc.

1951 Moved to Vienna, then scholarship to Paris, where she maintained contacts with Breton, Perét and Celan.

1954 Return to the Academy in Vienna and finish his studies (Prof. A. P. Gütersloh).

Together with Arnulf Rainer, Mikl, Hollegha and Prachensky, she belongs to the group around the gallery next to St. Stephan.

1961 Move to Paris, exhibitions in Paris and Vienna follow.

In 1968, she decided to emigrate to America – dissatisfaction with the acceptance of her art almost forced her to do so. Attended a three-month animation course at the School of Visual Arts in New York, own cartoons.

In 1980 Lassnig became a professor at the Academy of Applied Arts in Vienna, with her own master class. Works by Lassnig were exhibited at documenta in Kassel in 1982 and 1997. During this period, numerous solo exhibitions took place, such as in the museum of the 20th century in Vienna.

From the 1990s also in Paris, New York, The Hague, Frankfurt am Main, Zurich, Münschen and Rome.

Late honours mark the last phase of her life. Today, Maria Lassnig is regarded as one of the most important and versatile Austrian artists of the 20th century. 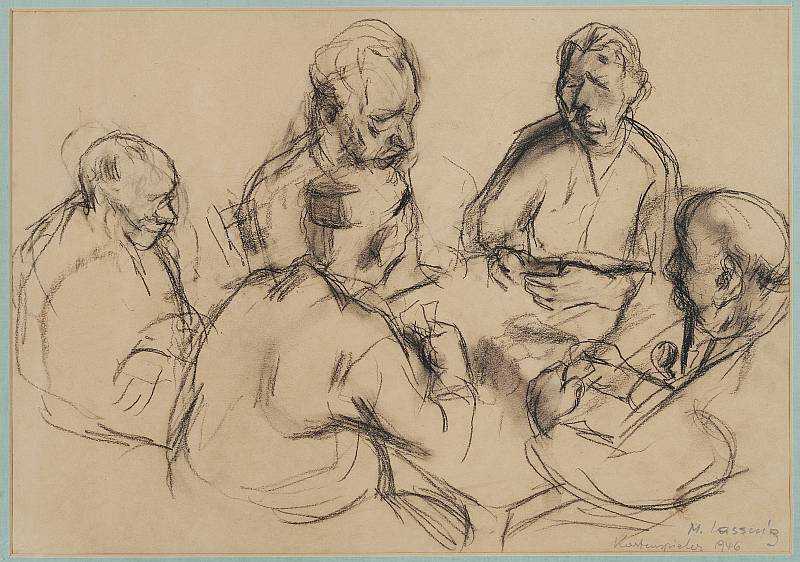