Switbert Lobisser (Tiffen bei Villach 1878 – 1943 Klagenfurt) attended the episcopal boys’ seminary in Klagenfurt and entered the Benedictine monastery of St. Paul im Lavanttal in 1899. After a two-year study visit to Rome, he was ordained priest in St. Paul, then 1904-1908 studied at the Academy of Fine Arts in Vienna.

1910 to 1932 drawing teacher at the collegiate high school in St. Paul. After founding a family in 1932, he was released again into lay status.

Commissions for frescoes in public buildings and private spaces, enthusiasm for the woodcut based on models from art history, which, especially in the form of commercial graphics, becomes his main activity.

In the 30s and afterwards the epitome of the Carinthian “native painter”, popular with both the bourgeoisie and the common people. His enthusiasm for the German national ideology in the 30s and 40s weighs heavily on his artistic legacy.

His extraordinary talent for the art form of the woodcut nevertheless secured him a high place in Austrian and especially in Carinthian art history. 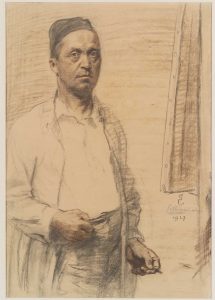