Sebastian Isepp (born February 18, 1884 in Nötsch in Gail Valley, † December 3, 1954 in London) was an Austrian painter and member of the Nötscher circle.

The son of an innkeeper went to the Matura in Marburg 1903 at the Vienna Academy of Fine Arts, where he studied with Rudolf Bacher and Oskar Kokoschka and Egon Schiele met. Stylistically, he was first influenced by Gauguin and the symbolism, later he turned to realistic-oriented painting. From 1908 to 1918 Isepp participated in important exhibitions of the Vienna Secession and was next to Kokoschka and Schiele as a leading member of the “Neukunstgruppe”.

During the First World War Isepp led the restoration workshop of the Kunsthistorisches Museum in Vienna, but had to perform mostly military service on the Italian front from 1915 to 1918, where he was buried life-threatening. After the end of the war and the return to Nötsch, he largely ceased his independent artistic activity. From 1921 to 1938 Vienna resided in Isepps, where he first emerged as a restorer in the early 1920s. From 1925 to 1936, he headed the restoration workshop at the Kunsthistorisches Museum in Vienna. In 1925 he married the singer Helene Hammerschlag, in 1927 the daughter Konstanze, born in 1930 the son Martin.

In 1938, following the “Anschluss” of Austria, the family was forced by Helene Hammerschlag to emigrate to London because of her Jewish background. Here Isepp, who assumed English citizenship in 1947, worked until his death as a restorer at the National Gallery. He also had friendly contacts with Kokoschka in London. In 1951, a portrait of Oskar Kokoschka was made by Isepp. 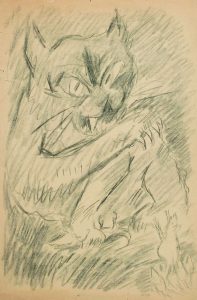 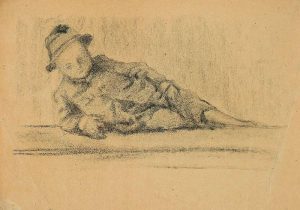